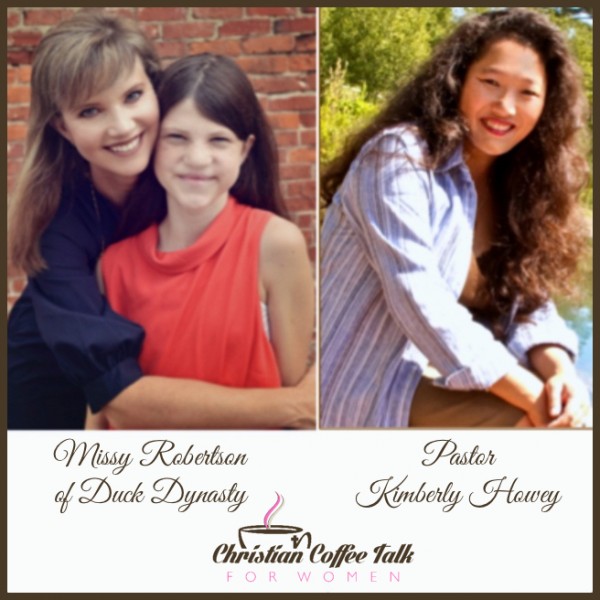 Ep51. Being the Change with Missy Robertson and Kimberly Howey

Coffee Talk Topic: Being The Change This episode inspires being the change we wish to see in our children’s lives as adults. Host Brandee Nielsen says “I think we use this phrase rather loosely. I believe that if we want our children’s lives to be better as adults, then our committment as parents to be like Christ will achieve the change we wish to see in them.” We’ll absorb this topic in two powerful interviews with two changemakers who share perspective altering views from their own life experiences. Featured Guests: Missy Robertson and Pastor Kimberly Howey First up is Missy Robertson of Duck Dynasty. Missy shares about her latest project co-created with her daughter Mia, called “Princess in Camo.” Princess in Camo is a new book series that illustrates how teens can manage real-life struggles with unconditional love, and with kindness. It also addresses faith, family, social and physical diversity. Then we’ll hear a riveting testimony from Pastor Kimberly Howey, who says she went from being an orphaned child to an heir as a daughter of the King. Kimberly inspires women to overcome the mentality of being a victim, a captive, and a slave. Kimberly says “many women, not only those who were orphaned or sexually abused, live their lives with this faulty mentality.” LINKS FROM THE SHOW Connect with Missy Robertson at http://www.missyrobertson.com Connect with Pastor Kimberly Howey on Twitter at @KimberlyHowey Resources: Holt International: http://www.holtinternational.org Princess In Camo Book Series: https://www.amazon.com/gp/bookseries/B07886BR6W Show Theme Song: Jesus Kind of Love by NateJacksonMusic.com