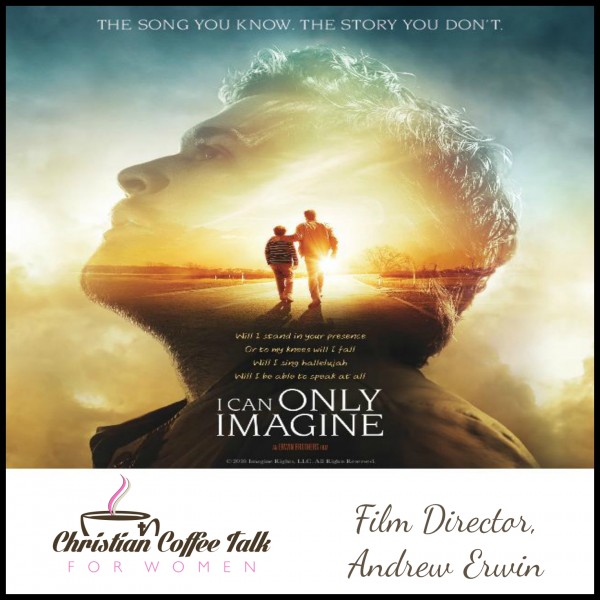 Ep43. I Can Only Imagine with Andy Erwin

Coffee Talk Topic: I Can Only Imagine This episode discusses the riveting backstory of the iconic hit song “I Can Only Imagine.” Bart Millard of the band MercyMe wrote the song for his abusive father after he passed away. Played by Dennis Quaid in the movie, Bart’s dad was redeemed through Christ later in life. Bart said, “my dad went from being a monster to the guy I wanted to be like when I grew up.” Host Brandee Nielsen says “this movie is for anyone who has experienced a challenging upbringing with a dysfunctional parent. It transcends diagnosis, race, religion, and creed. It’s an incredible true story that bears witness to the love of Christ in an unlikely circumstance. This movie sheds light on hope found in the darkest places. The kind of hope that is found in the promise of God in John [3:16].” Feature Guest: Andy Erwin Andy Erwin of Erwin Brothers Entertainment shares inspirational details about the movie and its actors. Andrew and Jon Erwin, known as the Erwin Brothers, are American Christian film directors, screenwriters and film producers known for such films as Woodlawn, October Baby, Moms’ Night Out and I Can Only Imagine. Their most successful movie to date is I Can Only Imagine, which grossed a worldwide total of $83.5 million against a production budget of $7 million, with only 1629 theaters for its opening week. Links From The Show Connect with Andy at www.erwinbrothers.com. Get a copy of I Can Only Imagine The Movie on Amazon. Subscribe to the Christian Coffee Talk Podcast on iTunes Podcast, Google Play Podcast, iHeartRadio, TuneIn, and Stitcher. Join our growing Online Community on where you can connect 24 hours a day, 7 days a week, 365 days a year! Check out our theme song, Jesus Kind Of Love, by Nate Jackson.